What was the first home/residence you had after leaving your parents home, and what was the most surprising thing you realized when you did? 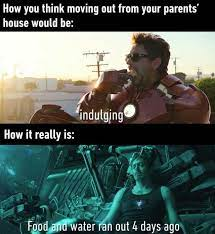 My first was a college dorm, where I lived with three different guys in three years. From this I learned some guys have better personal hygiene habits than others. The next two years I shared a college apartment with my brother, where I remembered why I didn't like sharing a bedroom with him as kids.

My first true residence outside of college life was an apartment, on my own in Manassas, Va. The good news was everything remained where I left it. That was also the bad news.
Reactions: Paintman, Lynne, ozentity and 3 others

They moved out of my current residence when I was 26. And it was my childhood home. At the time, I couldn't afford a place of my own and they bought a new home across town. Having lived with them for so long, the first night wasn't exactly pleasant. It was just me and our dog. The second night was an improvement by contrast and it just got better after that. I'm still here to this day, but eventually, I'm going to pack up and leave not just my home, but the state itself. I'm eyeing Colorado, Montana or Minnesota.
Reactions: Paintman, Lynne, ozentity and 3 others

At age 25, I bought a condo with a friend. He, me, and my friends’ then roommate - who was a high school friend - moved in together.

I don’t really think I should share about some of the things I learned about single guys. But, I’m happy to say that I learned that some people are capable of letting their hair down and opening up once no one is watching.

I think I would have missed some impressive life experiences if I had not lived with those two guys. It was worth more than it cost me.
Reactions: Paintman, Lynne, ozentity and 3 others

Shared a basement apartment with a room mate just off campus. His black Labrador dog wasn't happy about my taking her place on the sofa at night. That only lasted one semester, then we moved into an old building further off campus that had been converted into three 2-bedroom apartments. We had the middle floor. No central heating, there was a fireplace in the living room, a gas heater in the dining room and another in the kitchen. I had a water bed (remember water beds?) so kept the heater cranked up in winter. We burned a lot of scrap balsa in the fireplace from my architectural model projects. Balsa burns as fast as dry newspaper. The Lab got her couch back.
That was the location of the late-night bottle-rocket fight on the 4th of July, our building vs. residents of similar demographic in a building across the street, a four-lane road that had little traffic after about eleven PM. Stealthy moonlit barbarian raids from shrub to parked car to tree, combined with quickly-improvised rocket launchers that would have been the envy of the Blitzkrieg. Carlsberg Elephant beer from a giant, ice-filled cooler. The stuff of youthful legends, we probably would have worn face paint if anyone had any, there were a lot of anthropology students in the crowd I hung with. Fortunately no-one lost an eye, or worse, no property was burned, and no-one went to jail, as I look back with the stodgy, stick-in-the-mud wisdom of old age.
Although it turned out that one of the residents in the apartment below us, a rather smart guy named Gordon, was on the run and none of us knew it. He was very likeable, very intelligent, could talk about science and art, liked cold beer. After living above him for eight months, we found him being escorted away by Military Police one afternoon. Gordon had been AWOL for quite some time. The place was only a block away from a restaurant where another friend waited tables on the Sunday brunch shift, and stopped-by on his way home with a backpack full of leftovers from the buffet table. I was a much more active fisherman back then and had a big trout fish fry at least twice a month during the warmer months. We had the Hibachi going constantly.

After a year, I was ready for some peace and quiet and found a place of my own. But I'll never forget my time there, that's for sure.
Reactions: Benway, WitchAndShaman, Paintman and 2 others

Honestly, I loved living alone and never even considered trying to live with another male. I found peace in my quiet nights and peaceful days that I had lost by living with my parents for too long. I guess I was a little surprised by how nice it was to be free to do as I wished. As long as I lived in my parent's house they assumed that it meant that I needed them to supervise my every movement. I have had a full-time job since I turned 17 and should have moved out sooner.

By 19 I was making VERY good money. LOL, it pissed my Dad off that I was making more than him and he demanded a raise and got it. Hell, he was a branch manager of a multimillion-dollar business and was massively underpaid. He offered to quit and the guy that owned the company coughed up a BIG raise. In the end, it was good for everyone.

Once I was out of the house they stopped trying to run my life and we eventually redefined our relationship. They became my wife and my best friends and we did nearly everything together.

When I moved out I finally learned to like myself. As long as I was living with them I would never grow up and was WAY past the point of needing people telling me what to do and second-guessing my every move. I did pretty well. I never went back. I married and 46 years later have never been separated or even close to a problem. I was just someone that needed my space and to get my parents off my back.

Nothing came out like was expected of me. I was supposed to graduate high school and head off to a university on my way to an engineering degree. I made really good grades. The only time that I had a final grade below 85 they made me go to summer school to bring the algebra 2 grade up to an A. The 82 wasn't me not understanding it, it was me stopping caring about any of it. I was tired of it all and didn't have any desire to extend my education any further. I left high school that next year in the second semester. I never regretted it.
Reactions: WitchAndShaman, Paintman and Lynne

Left my parent's house after transferring to the Regular Army from the Territorial Army on an S-Type engagement. Six hours after leaving home I was stationed in Northern Ireland. Five hours later, I was on my first patrol in full NI gear. Forty-five minutes later, we were setting up a cordon after a car bomb exploded in Butcher Street........

I realised how much of a screwed up world we actually live in, how strongly people's beliefs can define them and how those beliefs can control their actions.
Reactions: Benway, WitchAndShaman, Paintman and 1 other person

I left home when I got married at 26. I have lived in the same home ever sense, 34 years. For those of you who know me, it’s no surprise. I do not enjoy change.
Reactions: Benway, WitchAndShaman and Paintman

Lynne said:
I left home when I got married at 26. I have lived in the same home ever sense, 34 years. For those of you who know me, it’s no surprise. I do not enjoy change.
Click to expand...

Then you probably don’t like people moving your cheese Lynne.
Reactions: Duke

Great stories, Tex & Stitch,
Not the first time I lived with other people but, I have 3 College friends that I shared an apartment with. We used to live together on the dorm floors for 2 years and they were a little older than me. But the remarkable thing was they were the three funniest guys I have ever met. Life was a constant stream of hilarity. It was like living with Mel Brooks and Steve Martin and a little bit of Chris Farley.

I've been known to say some funny things once in awhile but compared to these guys
- I was like a douer Victorian era mortician who just buried his daughter from consumption.
The apartment was best described as an off-campus almost retirement home. It was nice and quiet. Two of us needed quiet. I was ramping up towards my 10 bodybuilding championships and needed sleep. Steve was a six-year senior and if he didn't graduate, they would never let him graduate.
It worked out fine. They were really artsy guys, and one had a girlfriend that was a highfalutin opera singer. And we all supported each other. ( I remember one night we all went to the Opera at the auditorium. The four of us behaved but this could have turned into a Marx Brothers movie in one second.)

This discussion kind of brought something to mind that women may find interesting. Guys can have an instant best friend. You can really be sympatico with someone for a few months or even years. And never talk to them again. Friends from baseball, gym, golf, Army, painters, customers - if you have one thing in common they are a lifelong friend that you sort of rarely talk to, or invite over. But if somebody is in trouble we all come out of the woodwork to help.
Reactions: Benway, WitchAndShaman, Debi and 1 other person
You must log in or register to reply here.
Share:
Facebook Reddit Pinterest Tumblr WhatsApp Email Share Link
Top Bottom