Bigfoot on the move

This was posted on the bulletin board at a local park that is backed up into the Sam Houston National Forest. 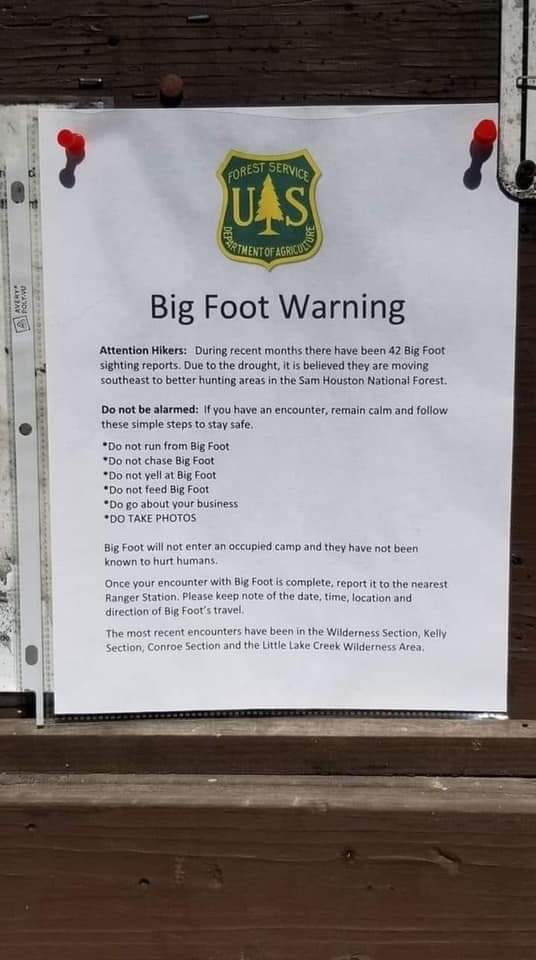 a notice like that will panick some ppl and will give others the idea to prank ppl......they should have added " DO NOT SHOOT BIGFOOT "
Reactions: Cat Man, ozentity, Lynne and 1 other person
OP

Unfortunately, Bigfoot has no protection in Texas at this time and there are groups actively hunting it with the intention to kill one for proof and study. Honestly, I don't think that it is going to panic many people that would be camping or hiking in this area. It is very isolated and wild and most people here consider a handgun at least to be an important part of hiking gear. I used to spend quite a bit of time out there and always carried a gun. Bigfoot doesn't scare me at all. I worry about the other two-legged animals that I know are out there and not always very nice. This is an area that has a lot of poaching and I've heard that there are some marijuana fields out there. It is a huge heavily forested place. Most people don't get off the trails and I seldom went on the trails except to cross them. There have always been a lot of stories about people having odd encounters in this area.
Reactions: ozentity, Lynne and Debi

Paulm said:
a notice like that will panick some ppl and will give others the idea to prank ppl......they should have added " DO NOT SHOOT BIGFOOT "
Click to expand...

Good point! Also false info was given too. There have been many reports of BF entering camp sites. People even say they’ve been touched. There are also reports of BF attacking especially in the south.
Reactions: Paulm and ozentity

Do not run from BF ? Are you allowed to power walk away ? Just to change your undies.
Reactions: Cat Man, Paulm and Lynne

IMO Bigfoot is a creature that can go between worlds. That is why they dissapear at will and the orbs of light and UFO actvity that come with them. I agree to live and let live but to be honest any BF that wants to take a loved one is not wanted . There are plenty of reports of them being aggressive and going after little kids. Many tribes claim they are cannibals and to stay far away and others that they are helpers and just leave them along. I would truly leave them alone but why all the people going missing in the parks and in the mountains? Very interesting article and posting.

Walking Goose said:
IMO Bigfoot is a creature that can go between worlds. That is why they dissapear at will and the orbs of light and UFO actvity that come with them. I agree to live and let live but to be honest any BF that wants to take a loved one is not wanted . There are plenty of reports of them being aggressive and going after little kids. Many tribes claim they are cannibals and to stay far away and others that they are helpers and just leave them along. I would truly leave them alone but why all the people going missing in the parks and in the mountains? Very interesting article and posting.
Click to expand...

I think they may be as different as people are different. If they are a species of human or a race of beings from somewhere else they probably have individual personalities. Their circumstances, environment and genetics will determine what we encounter in the woods.
OP

The various different "tribes" of Bigfoot/Sasquatch seem to be as variable as the different groups of people. I often think that this variation is very indicative of their intelligence. The local group that you hear about around here are not very aggressive. I suspect that this is simply a response to the fact that people here carry guns and if attacked there would be no doubt about Bigfoot's existence because we would have a body.

Never run from any predator!! If you run that will identify you as prey. There is no predator that I know of that can't easily outrun and catch a man. Don't turn your back on a predator for the same reason. The thing is that, based on all the reports, there is no indication that any of the American tribes prey on people so if you stand your ground facing them and then slowly back off it is unlikely that you will be attacked. Generally, once they know that you have spotted them they will leave your area.

If Bigfoot exists it is a hominid relative of man and not some sort of ape variant. They are massively intelligent or they wouldn't be so hard to find and take pictures of or kill.
Reactions: Lynne

They are saying it has never been known to hurt people so why all the rules? Even if it doesn't exist I feel this notice is to attract people to the park and not scare them away. I suppose the same rules would apply to bear encounters.
Reactions: Paulm
OP

Just because a large animal does not actively or intentionally prey or attack people does not make it cuddly or something you need to get close to. I've been raised around large animals for most of my life. The sweetest cow can break your ribs just being friendly and the same is true of horses. Bigfoot if it is real has more than just big feet.

I often have wondered if the more active sorts of encounters with Bigfoot might be people being teased by adolescent bigfoots. Most primates go through a rather active and aggressive period at that point in their development.

The park where that was supposed to be posted is a rather quiet and off-the-beaten-track campground. There is no water and no power in those campsites and it is often used more as a day picnic place than a serious camping area. The fishing is good there though but most people leave the area at night.

There is the possibility that it was posted as a hoax but that area has had a lot of reports over the years that get little to no attention. When I say reports I don't mean anything official. There are no park rangers there other than an occasional park host that will stay there for a while in the one place that has water and power. I used to fish there pretty often and people were always talking about odd things like garbage dumpsters being ransacked and such. We don't have bears here and about the biggest trash raider would be a boar coon or an occasional pig.

I also worked for a lot of the people that live in the area and they all seemed to have "stories" about things visiting and tearing things up at night. In other places, you might think about kids but this is rural Texas. You can get shot messing around someone's place at night and it would be a legal shooting. Here even our kids have more sense than that. If I hear something outside at night I grab a gun and go out to chase it off. We don't call the police except to have a body removed. If you call it will be several hours before they show up so what is the point.

I used to live cuddled up against the national forest but that area just didn't have any bigfoot activity. I think it was that there were ranches and homes around the area where the place where this was posted has Lake Conroe on one side and several hundred thousand acres of National Forest on the other with no homes in that area and no ranches. I don't think that any of the native animals like barbed wire much with the exception of deer. They just either hop over it or slide under it. The area with a lot of reports don't seem to have much fencing.
You must log in or register to reply here.
Share:
Facebook Reddit Pinterest Tumblr WhatsApp Email Share Link
Top Bottom