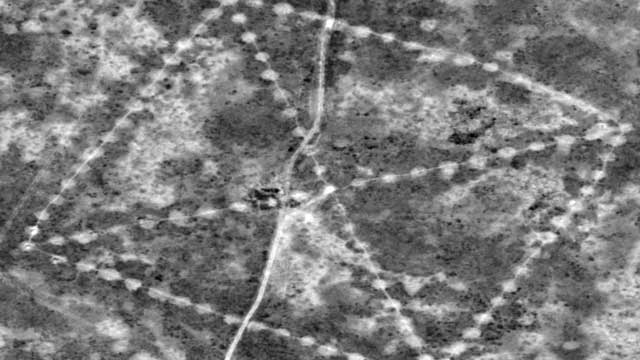 High in the skies over Kazakhstan, space-age technology has revealed an ancient mystery on the ground.

Satellite pictures of a remote and treeless northern steppe reveal colossal earthworks — geometric figures of squares, crosses, lines and rings the size of several football fields, recognizable only from the air and the oldest estimated at 8,000 years old.

The largest, near a Neolithic settlement, is a giant square of 101 raised mounds, its opposite corners connected by a diagonal cross, covering more terrain than the Great Pyramid of Cheops. Another is a kind of three-limbed swastika, its arms ending in zigzags bent counterclockwise.

Described last year at an archaeology conference in Istanbul as unique and previously unstudied, the earthworks, in the Turgai region of northern Kazakhstan, number at least 260 — mounds, trenches and ramparts — arrayed in five basic shapes.

What do you think? Ancient aliens?
Reactions: 7Christie

I wonder if they could be burial mounds ? I'm not sure, but If it were a ink blot test ,I would say that there are faces in there
OP

I think I saw some other pics on this today. Off to check that out!
Reactions: Grinchesbro
OP

Here's the other one released.....
Reactions: Grinchesbro

I am seeing some similarities in this picture to a native american symbols called "Whirling Logs," .Not saying that the same people made them but ,maybe they had the same friends

Grinchesbro said:
I am seeing some similarities in this picture to a native american symbols called "Whirling Logs," .Not saying that the same people made them but ,maybe they had the same friends
View attachment 3171
Click to expand...