Ever since the days of Tom Thumb and Lemuel Gulliver, shrunken humans, tiny humans, and tiny humanoids have be grist to the mill of science fiction. Unfortunately, as I explained in my sci-fi blog, they are biologically impossible. That is why I find reports of such beings so intriguing. The list of shortest people reveals a number of dwarfs slightly taller and, in some cases, slightly shorter than 2 feet [60 cm]. Nevertheless, many of them had disproportionate body parts, and all of them grew up and lived among people of normal height. A breeding population of such little people might run into problems. What is certain is that any sighting of a normally proportioned adult much shorter than this is unlikely to refer to anything of flesh and blood. So what are we to make of the following reports of tiny pilots of tiny craft?

(1) In Hertford, England in 1929, a five year old girl and her eight year old brother had such an unsettling experience that they didn't talk about it themselves until about 1960, and the lady herself did not reveal it to outsiders until 1970.
They had been minding their own business, playing in the garden, when they heard the sound of an engine. Suddenly, down came a miniature biplane, with a wingspan of no more than 12 to 15 inches [30 - 38 cm]. It landed next to the garbage bin, and for the few seconds it was on the ground, they clearly saw a "perfectly proportioned tiny pilot wearing a leather flying helmet". He waved to them as he took off.
Reference: Gordon Creighton, 1970: 'A weird case from the past', Flying Saucer Review 16(4), p30, but I have taken the summary from Jerome Clark's book, Extraordinary Encounters.

(2) In 2002 a Californian lady named Jayne Kamal posted the following story. Around 1974, she and her older sister were alone in the kitchen baking chocolate chip cookies and looking out the patio window into the back yard, when something caught their eye.
I remember I literally shook my head and looked at my sister. I said, "Did you just see.........then she said, "A little man on a motorcycle......then I said, "Float across our back yard?!!!" We both started laughing and couldn't believe it. It had looked like a leprachaun (but not dressed in green) on a tiny motorcycle, which just floated over the fence, over the backyard, and over the neighbour's fence.
Mrs Kamal also said she shared the story, not without a certain embarrassment, with a coworker called Susan, who also had had a peculiar experience. When she was little, she had been playing in her upstairs bedroom when she heard a tapping on her window. There stood a tiny little man who, when she let him in, talked and played with her before exiting via the window and climbing down the ivy. Apparently, he came back several times after that. He told her his name was Jiminie Cricket, but he looked nothing like the Disney character of that name.
Mrs Kamal's mother-in-law was 75 years old at the time, but insisted the following story was true. When she was 15 years old and living in Palestine, she had been cleaning the house. She flipped over a couch cushion, and saw three little people. She screamed, dropped the cushion, and ran out of the room. Of course, when her parents arrived and lifted the cushion, the minuscule beings were gone. They always are.

(3) This essay would be incomplete without mentioning the classic Malaysian micro-ufonauts, which were typically described as being just 3 inches [7-8 cm] tall. Significantly, nearly all the witnesses were children in the age group 8 - 14 years, and the sightings took place close to schools. Their stories are related in more detail elsewhere in the internet, so I shall be brief.
It began on 2 July 1969 when a silver UFO the size of a dinner plate landed in the grounds of a primary school in Johor Bahru, and out stepped five men wearing red uniforms, who were only 6 inches [15 cm] high. When they saw a crowd of children heading towards them, instead of returning to their craft, they jumped down a hole in the ground and vanished, and their spaceship likewise vanished.
In August 1970 a sensation was produced by the alleged appearance of a large number of 3 inch aliens outside Stowell Primary School at Bukit Mertajam, in the State of Penang. It made front page news in the leading Singapore newspaper, The Straits Times on 21 and 22 August, and you can read them here and here. The narrative is a little confused because the events were related out of chronological order. Also, since the paper was based in Singapore, and the events took place in Malaya, the dispatches were dated the day before publication, something to remember when reading the words, "yesterday" and "today". With this in mind, here is a summary of the time line.
Wednesday 19 August 1970. In the blukar, or secondary scrub, outside the school perimeter, 10-year-old Wigneswaran saw 25 tiny humanoids venture out of 25 tiny flying saucers, but just as he was getting closer for a better look, the school bell summoned him back to class. This would have been in the middle of the day. Later, after school (in the evening, said the paper) he and five other boys, aged 8 to 11, were playing "cops and robbers" in the same general area, when they saw a flying saucer the size of a soup plate land nearby. Out of it emerged five 3-inch-high humanoids, four of them clad in tight-fitting blue uniforms, and the one assumed to be the leader dressed in yellow. The boys ran away after they saw the little men installing an aerial on a tree.
Thursday 20 August. Some of them returned at half past 6 in the morning, and found the UFO parked a few yards from the original spot, with the little men still guarding it. It appears that it was on this occasion that 8-year-old Mohamed Ali was shot in the hand by some sort of tiny gun. After they reported it to the headmaster, he went out with another teacher, but found nothing. During the 11 o'clock recess Wigneswaran and his friend, Sulaiman, also aged 10, returned to the site. The UFO was gone, but the aerial was still there. 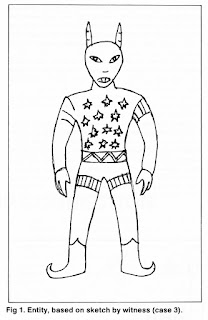 Nevertheless, it appears to have been the same day that Wigneswaran was found unconscious in the blukar and carried back to the school by some prefects. He told them he had encountered the same five entities again. Once more, the presumed leader was dressed in yellow and, unlike the others, possessed two "horns". When the boy tried to capture him, the creature shot him with a tiny gun, leaving a small red dot on his right leg. Then he fainted.
On the left is a smartened up version of the sketch 10-year-old Wigneswaran made of the yellow suited leader, which appeared on the front page of the newspaper. He also sketched the head of one of the hornless ones, plus the flying saucer. It was disc shaped, with a cupola, three supporting legs and, specifically, two ladders.
After school, two boys who hadn't been with the original group, T. Veerasingham (10) and A. Devaraj (12) decided to investigate. They went to the site, and saw two entities, just 3 inches high, sitting in a tree. One of them was dressed in yellow, and carried what looked like a gun, but he had only one arm, the left. (What an unusual feature to make up!) When they boys tried to catch them, they simply vanished.
The local police corporal, Mokhtar reported that, when his 7-year-old son, Mohamed Ariffin arrived home about 6.30 pm, he had a small cut on his left hand. He told his mother he had seen two tiny spacemen in the blukar, and when he tried to catch them, one of them shot him.
When I first read these bizarre stories, I imagined they were contagious confabulations ie once a story developed, it became part of a school boy "craze". Well, theoretically, some of the stories could have been invented after the first one was told. But is this the full explanation? They reported it to the headmaster. He didn't believe them (well, he couldn't, could he?) but he appears to have accepted that they believed it themselves. They were interviewed by the CID (Criminal Investigation Department), as well as the journalists - not to mention the parents of one of the boys. As I explained once before, children of this age find it hard to maintain a hoax, because they don't know adults' criteria for credibility. They will either destroy their testimony by adding outrageous flights of fantasy, or they will break down and confess. Considering the intense questioning the boys were subjected to, wouldn't you expect one of them to break? And what about the by who fainted?

I believe there are more things happening in our world than we can know. Maybe there are other worlds and dimensions. They may be bigger or smaller than us. Size is relative to the world we exist in.
Reactions: Debi
You must log in or register to reply here.
Share:
Facebook Reddit Pinterest Tumblr WhatsApp Email Share Link
Top Bottom