I got offered to buy a 57 Chevy when I was 23 for $2000, I declined because it cruised on only 50mph and I was into fast cars. The same car goes for around $80 000 over here today .
Reactions: Debi, Paintman and garnetsilver 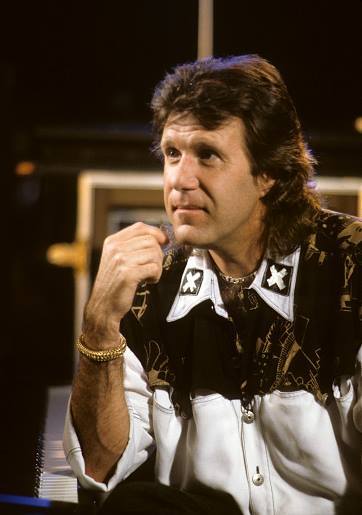 Back around 2000, this gold bracelet owned by rock musician Keith Emerson went up for sale on Ebay. It was one he'd famously worn for years, and he was parting with it because he needed the money. As I recall it sold for between $3000-$4000.

I considered buying it as an investment, it was worth about $1500 in gold content alone. I eventually decided against it. Gold prices have gone up at least five fold since that time, so today it would be worth better than twice what it sold for in melt down value alone. But as a fan, I regret not buying it.
Reactions: ozentity, Debi and garnetsilver

Stevedog - go get The Dark Rider !

I took a pass on a Beretta side by side 20 gauge with some very unique engraving. There was a small squirrel, rabbit, & 2 birds inlaid in silver. It was Factory engraved with a beautiful stock and superb blueing. The animals looked like cartoon characters ! $1200 used.
And I could not justify that bargain price because I wasn't into shooting side by side shotguns. It was skeet and Sporting Clays and trap two or three days a week and all I could do to keep myself in ammo.

2 years later I get invited to a pheasant hunt in Central Illinois. Then I really wanted it and it was long gone. I wound up buying an SKB 20 gauge s/s, and that hunt went on to be an annual thing for a decade.
....
Reactions: Lynne, garnetsilver, ozentity and 3 others
OP

My husband did buy the 57, got it running and ended up in a head on collision and totalled it a few weeks later. I'm told he was 19 at the time.
Reactions: Lynne, garnetsilver, ozentity and 2 others

Stevedog said:
When I was in highschool I was hanging out at the mall with some friends. We happened into a KayBee Toys store and there on the shelf was the most awesome action figure I had ever seen. It was called the Dark Rider Batman. It was a Batman figure armed with a sword sitting on a black horse reared up on it's hind legs. I instantly knew where in my room I would put it and snatched it off the shelf to view the price tag. Being that is was more than just a simple action figure I knew it would be more expensive than the other Batman or GI Joe toys on the shelf. I experienced disappointment to see that it was more than the few dollars I had with me at the time, followed by elation seeing that it was marked down on sale, then the devastation of realizing that I still couldn't afford it right that moment. I went home empty handed.

However, in my room I had some money which I kept in an old book, as that seemed like a cool hiding spot to a teenager. So when I got home I went to the book shelf, grabbed the money and made plans to go back and buy my Batman figure. It was only two days later when I went back to KayBee Toys but the Batman was gone. I asked the store clerk about it and he said this Batman was part of a limited edition line of Batman toys and the one I wanted had been the last of their inventory. These particular figures were no longer available for the store to even order.

Over the next few years I made it a point to seek out the Batman action figures whenever I went to any toy store, hoping someone would have an old Dark Rider Batman collecting dust off n a shelf somewhere. I have never able to find one in any toys store since. I did see one at a comic book convention once. The guy was asking $100 for it.

I know that I could probably go on to Amazon and get one shipped to me, but it wouldn't be the same. In highschool it was a cool figure I could display in my room. Now as a guy in his mid 40's it's something my wife will look at and wonder if I'm having a mid-life crisis.
Click to expand...

I'll second paintmans suggestion, go get the Batman figure. I'm in my 50's and still collect collectible figures and such. I have skulls all over my studio and office, along with a fair collection of collectible or just interesting action figures and glassware. Too many years in the art world and tattoo lifestyle I guess, but if it's something you like then go for it, life is too short for regrets
Reactions: Lynne, garnetsilver, Lone Wolf and 4 others

Debi said:
My husband did buy the 57, got it running and ended up in a head on collision and totalled it a few weeks later. I'm told he was 19 at the time.
Click to expand...

He was probably lucky he was in the Chev, I can imagine what would become of a late model car up against one now.
Reactions: Lynne and garnetsilver
OP

ozentity said:
He was probably lucky he was in the Chev, I can imagine what would become of a late model car up against one now.
Click to expand...

He walked away with a minor injury. Heck, we got lightly rear ended in a Kia 2 years ago and it totaled the thing!
Reactions: garnetsilver and ozentity

Debi said:
He walked away with a minor injury. Heck, we got lightly rear ended in a Kia 2 years ago and it totaled the thing!
Click to expand...

They reckon you are safer in modern cars, maybe from the impact but I feel more at ease with actual steel vehicles, lol.
Reactions: Debi

I regret not moving into my late grandmother's house after she passed. I love my childhood home, but there were just as many memories tied into her house as there are here. The downside was I'd always found it creepy as an adult. It'd get so quiet you could hear a pin drop on the opposite side of the house.
Reactions: Paintman, Lynne, garnetsilver and 1 other person

ozentity said:
He was probably lucky he was in the Chev, I can imagine what would become of a late model car up against one now.
Click to expand...

For that reason, when I started college, my father bought me a used car; a beige Lincoln Town car. I felt like a shrimp in that thing, but he said that he wanted a lot of car between myself and any collision. Two years later, I did get involved in a head on; fortunately we were both only going fifteen mph over a bridge. The car got totaled, though, and I had whiplash.
Reactions: Paintman and ozentity
You must log in or register to reply here.
Share:
Facebook Reddit Pinterest Tumblr WhatsApp Email Share Link
Top Bottom