On first glance, these intricately carved knobbly orbs might appear to be ornaments, or perhaps ancient toys. It’s unclear, because little is known about these roughly 4,000- to 5,000-year-old artifacts, except for a few details.

Over 400 of the relics have been found in Aberdeenshire, from the 19th century to as recently as 2013. Aberdeenshire is located in northeastern Scotland, and a few were found scattered across northern Ireland and England. Measuring between 2.75 inches and 4.5 inches in diameter, these orbs are made from materials such as granite, serpentinite, and sandstone, and can fit in the palm of your hand. The number of knobs on each stone ranges from six to 160, and they are engraved with horizontal lines, spirals, or circles.

Since the 1800s, museums and historical societies have catalogued these stone balls. The more they gathered in their collections, the more questions and theories arose. The earliest theories argued the stones resembled geometric stone symbols of the Picts, a group of people who lived in northern Scotland during the late Iron Age of 800 B.C. to 43. However, most of the balls date back to well before this era.

One 1876 theory from the then Vice President of the Society of Antiquaries of Scotland, Dr. John Alexander Smith, posits that the balls served as weapons, possibly attached to wooden sticks and swung around. In a 1914 Society of Antiquaries of Scotland meeting, archaeologist Ludovic McLellan Mann alternatively proposed, “they were used as movable pieces of weights on weighing beams” that originated from Roman statera balances. Another theory cites that oracles rolled the balls to foresee the future or as though they were dice. 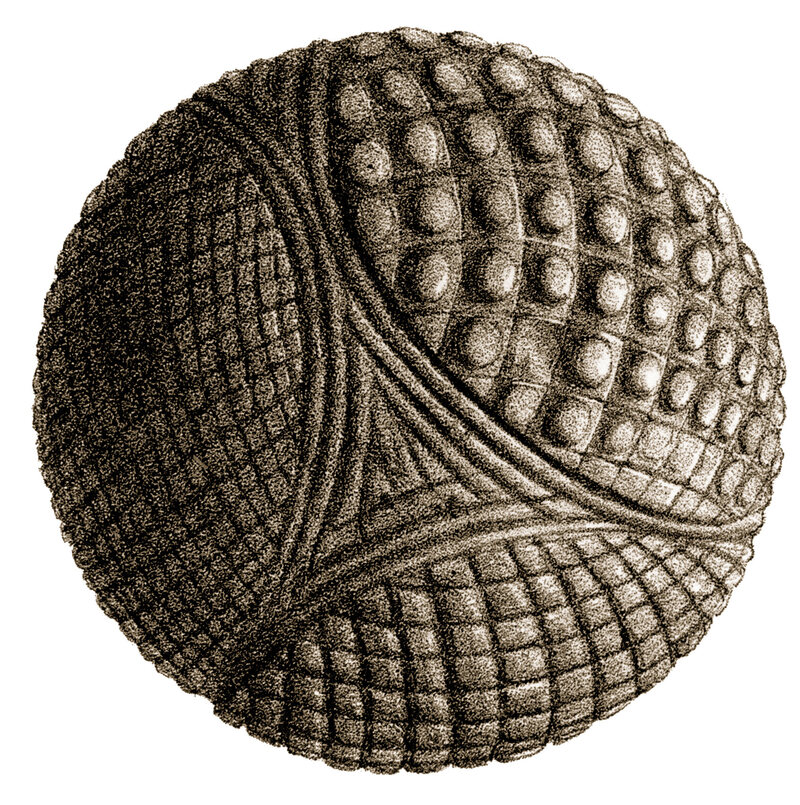 Archaeologist Dorothy Marshall disputed those theories in her 1976-77 Proceedings of the Society of Antiquaries in Scotland report, and surmised that the balls’ use will likely remain unknown.

The seemingly unsolvable puzzle doesn’t deter the speculators. University of Oxford mathematician Professor Marcus Du Sautoy theorizes in a Ashmolean Museum video, that the people using the balls “were starting to be mathematicians” and the artifacts were early examples of abstract thought and humans exploring symmetry. In his article The Carved Stone Balls of Scotland: Who made them, and why?, amateur historian Jeff Nisbet proposed that the carved stones functioned like “the résumés and portfolios of today’s workforce,” and “verified a mason’s ability to work stone,” as they traveled from site to site.

Maybe the balls are indeed portfolios or weapons or nothing at all, but it’s always fun to guess. What do you think these balls represent?

Does Anyone Know What These Knobbly Orbs Are For?
Reactions: Benway

Well they would hurt if flung at ya.

Debi said:
proposed that the carved stones functioned like “the résumés and portfolios of today’s workforce,” and “verified a mason’s ability to work stone,” as they traveled from site to site.
Click to expand...

It would be a plausible theory
Reactions: 7Christie

Could those be stones for a game like who can throw onw the farthest or something to that effect?

I know it doesn't sound very scientific-y but why not invite a group of those claiming psychometric abilities to examine those stones.

Maybe someone in that group could provide some hints that might put researchers on a trail ultimately leading to some scientific-y facts.
Reactions: Lynne, Benway, 7Christie and 1 other person

With logs for clubs!