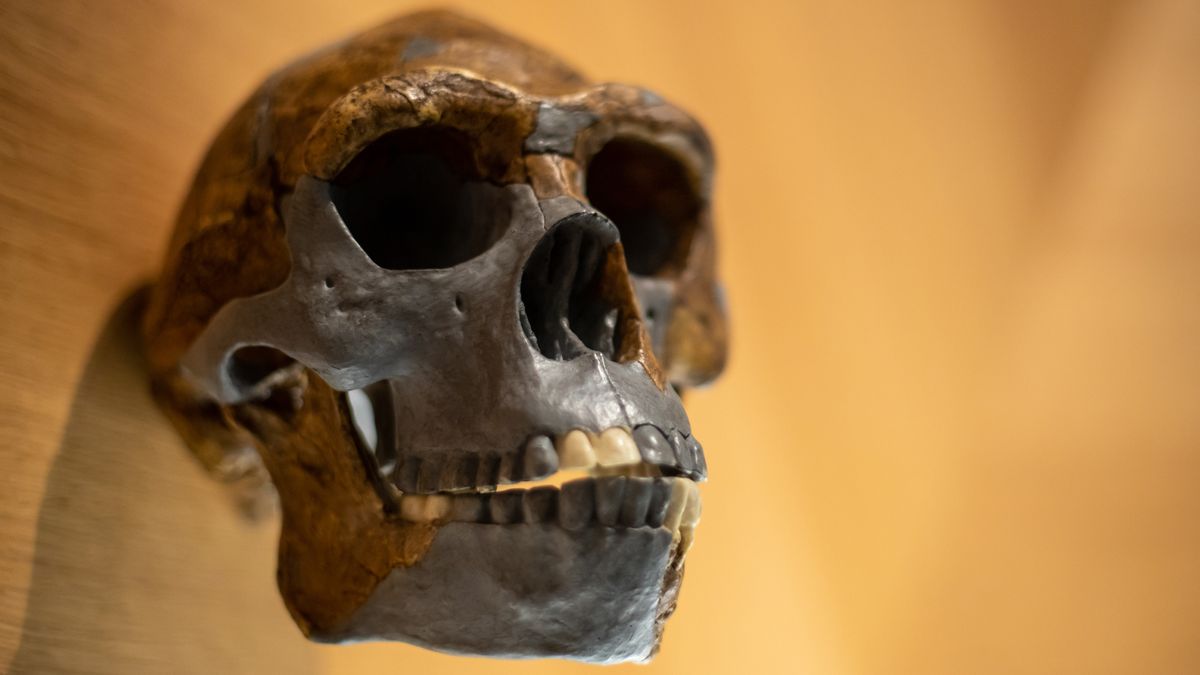 Mystery ancestor mated with ancient humans. And its 'nested' DNA was just found.

Today's humans carry the genes of an ancient, unknown ancestor, left there by hominin species intermingling perhaps a million years ago.

Fits in well with my theory of things.

I have seen and talked to a few of that rare genetic effect that occasionally throws up a pure example of a knuckle dragging Neandertal.
Characterised mostly by a hunched gait, heavy eye socket/ bone structure and decreased mental capacity. -Usually wearing a uniform.
Reactions: garnetsilver, ozentity and Paintman

In general, people don't like to think that they are affected by evolution. We are the TOP it can't get better than us. Yeah, right! The line of Homo has been a long and incredibly diversified line. I suspect that we have barely scratched the surface of the many versions of us that have existed.

The current version of Homo Sapiens has evolved during a very quiet time geologically. Actually the only threat that the current version has had to deal with is other Homo Sapiens. We wiped out so many groups of people. Killed them to the last man or woman. We have basically wiped out most of our preditors to the point where those that are left are mostly protected to some extent.

People don't realize that as a species we don't do really well with change. The Neanderthals evolved into an ice age world. They were stocky and massively strong. Their brains were actually bigger than ours so the idea of them being knuckle draggers is false. What happened is that the first entire Neanderthal skeleton that they found was an old arthritic man that WAS hunchbacked and had swollen joints. Based on that they were described as near apelike animals.

They hunted big fatty animals. Their metabolism burned calories at a rate several times ours to stay warm and handle the hard life that they lived. When the ice receded the animals that they preyed on disappeared and the animals that replaced them were leaner, faster, and smaller with very little fat. the neanderthals basically starved to death before they could adapt.

They didn't go totally extinct though many of us still carry their genes in our genome. Back then people didn't travel much. If a big tribe was isolated for several hundred years they developed to best survive in that place. We may look different but we are all nonetheless Humans. The Neanderthals were Human. They bred with the new people that came up from the south and we still carry their markers.

We most likely had contributions from many different versions of "people". They are probably not around anymore because we killed them.
Reactions: Paintman, garnetsilver and ozentity

Rowan2222 said:
Fits in well with my theory of things.

I have seen and talked to a few of that rare genetic effect that occasionally throws up a pure example of a knuckle dragging Neandertal.
Characterised mostly by a hunched gait, heavy eye socket/ bone structure and decreased mental capacity. -Usually wearing a uniform.
Click to expand...

You get them in all walks of life,they all seem to have the same dull attitude and best not messed with.Over here we refer to them as "Gronks",lol.I really believe they have thrown back to our primitive ancestors.
Reactions: garnetsilver

It is exactly the same in the plant world. Out of 1000 plants grown from seed some will carry traits that existed generations ago, while others will be totally new. It is then down to climate and nature to see what survives best - which then sets seed and you end up with more having that trait. When we go back into the next ice age maybe the Gronks will be the successful ones?
Reactions: Paintman, ozentity and garnetsilver

When we go into the next ice age the Inuit (Eskimos ) and the (Paleo-Siberian), Yeniseian, Uralic, and Altaic will become the new best-adapted people for the new world. No doubt the rest of our descendants will try to handle it with technology but in the end, those best able to be comfortable and survive with the least amount of technology are going to slowly populate the world to replace those that were too poor to live in a climate-controlled place.

It will be much as it is now. the populations of the wealthy nations would all be falling if not for the immigration from less successful places. The Japanese have an intense dislike for Korean workers BUT without them, they couldn't keep their factories running. We in the US are much the same. The Hispanic immigrants legal or not so legal are the people that feed us and build our homes. There is no way that you could get an American on welfare to work in the fields, or on a construction crew, or in the huge slaughterhouses that KC is full of to feed us.

In the end, it is always going to be the poor that will populate the earth while the rich and pampered members of the wealthy cultures will slowly fade out. The poor will adapt. They don't have a choice. The top of the population as far as wealth will resist change and that just doesn't work.

TexDanm said:
In the end, it is always going to be the poor that will populate the earth while the rich and pampered members of the wealthy cultures will slowly fade out. The poor will adapt. They don't have a choice. The top of the population as far as wealth will resist change and that just doesn't work.
Click to expand...

- How can we speed this process up?


I think we can adopt the principles of Amazon and Google.- Set ourselves up as a private company and just don't make any profit.

I fear that it is coming. there are several things coming to a head in the near future. I'm not talking so much about political things as I am natural physical things that we KNOW about but then for political reasons nothing will be done. This is the major flaw in our current version of Democracy. All politicians base their actions on how it will affect them in the next election. This make them totally incapable of making hard decisions about things that are going to happen in the distant future like in 6 or 7 years because if they do what is right and it is hard on the voters they won't be in office in 6 years.

The rich have been moving their assets out and to other places for about 10 years now. Any time they can, they will shut down a factory in the US and build a new one someplace else where the labor is cheap and there are no government regulations that can't be "adjusted" with a bribe.
You must log in or register to reply here.
Share:
Facebook Reddit Pinterest Tumblr WhatsApp Email Link
Top Bottom