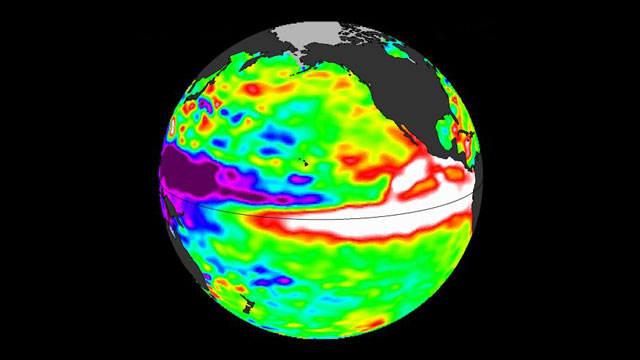 
After setting a record for a single-week period in mid-November, El Niño has continued to produce record warm temperatures in the Pacific Ocean. This climate pattern, characterized by an abnormal warming of the equatorial Pacific Ocean, has already contributed to a large number of weather effects around the planet, including increased hurricane activity in the Pacific Ocean and heat across much of the United States.

Of the metrics used to gauge the strength of El Niño, the most straightforward is to look at temperatures between 90 degrees west and 160 degrees east longitude, and 5 degrees north and 5 degrees south of the equator, known as the Niño 3.4 region. Back on November 16, the National Oceanic and Atmospheric Administration reported that this area of the Pacific had a weekly average temperature that was 3.0 degrees Celsius above normal, a record high, topping the 2.8 degrees Celsius anomaly recorded during the week of November 26, 1997, the last really strong El Niño.

During the last two weeks, the temperature in this key region of the Pacific has stayed at or slightly above 3.0 degrees Celsius, NOAA says. The agency’s Climate Prediction Center predicts that El Niño will likely peak during the Northern Hemisphere winter 2015-16 and will transition to neutral conditions during the late spring or early summer 2016. Forecast models predict a peak later this month.

Much of the United States has seen very warm conditions as a result of El Niño. Meteorological fall, which runs from September through November, was the warmest on record for National Weather Service stations in Los Angeles, San Diego, Salt Lake City, El Paso, and New York City. Most of the United States should see continued warmer-than-normal conditions through most of December.

I'll take it. Keeps my heating bill down.....
Reactions: Maphoo

During an El Niño, the trade winds weaken in the central and western Pacific. Surface water temperatures off South America warm up, because there is less upwelling of the cold water from below to cool the surface. The clouds and rainstorms associated with warm ocean waters also shift toward the east. (google)