I can't explain what I've seen

Hi, first a quick intro: I'm not a person that does this kind of stuff (posting on a internet forum), but I've been grasping to try to explain what's been occurring for almost 10 years now. I'm a person of science all my life and try to find explaintions based on facts. When you encounter things you can explain it can be very very disturbing.

Okay here goes: about 10 years ago I was taking a trip to bears ears area of south eastern Utah just outside the Navajo Indian reservation .

It was July and HOT over 100 degrees (no kidding). I do outback walkabouts all my life, I'm very experienced survivalist.

as I was headed up a canyon in the area on a hill of slick rock in front of me about 200 feet away what looked like a hugh rabbit (yes a rabbit) jump out from behind a bush and was looking straight at me. When hugh I mean when it was sitting it was a good 3 1/2 to 4 feet tall. It looked ruff, it kind of looked like bugs bunny had fallen on some very hard times, it's ears draped down the side of it's head down it's body, it had cheeks kind of round ( no kidding like bugs bunny) with off white fur and a dingy gray coat of fur.

It moved up the hill looking back at me moving front legs forward first then moving the back legs in a very unusual slow manner, then turned sat there at stared at me.

I had a waist backpack on and reached around my back to grab a Camara and when I did so it stepped sidways behind the bushes, you could tell it thought I was pulling out a firearm and went into hiding. This thing was way to comfortable we me and you could see it was calculating what it was going to do, until I reached around my back. I kind of blew it off as some kind of strange critter in the desert not many have ever seen and keep on going. Spent the night at the base of canyon and moved on. Nothing really happend after that on the trip.

Year later I was backpacking with a friend in canyon in another area of Utah (south western). Me a buddy went in for a few days and came back out all was good, the night we came out we spent the night at the vehicals. It was dark star filled night when I look above us and saw a light in the sky (wasn't extremely bright but was a sold, not blinking and yellow in color) that was kind of floating back and forth has it was moving forward across the sky. It was as high as say a helicopter would fly. My buddy and I watched while it slowly landed about 4-5 miles down the canyon we just came out of. We joked it off, saying if i see little green men I'll honk the horn as I'm getting the heck out of here! No little green men, all good.

Two years later I purchased two properties with homes, one in the mountains of colorado and another in Arizona.

They are both off grid, has I was putting power in the place in CO, I arrived one day with a sealing fan running with a bent blade that was rubbing the ceiling making a heck of a racket. I turned if if and thought the folks helping me must have not noticed it when flipping on the power, they must be def but oh well.

Continued to remodel, floors, etc. Was taking a bath one day and a little flickering light (kind of like what you would see in light reflecting thru a drop of water) went across the room and thru the wall. Oookay.... what the heck!

The bathroom gives a uneasy filling. Like to don't want to close your eyes while taking a shower kind of uneasy.

Months went on: was sitting in a chair by the front door one night when a noticed what looked like a small cloud of smoke come thru the closed front door, go over to a chair, then to a trash can, then out the closed kitchen window. Said to myself: okay..time for bed and went to bed.

Finished up the remodeling and was headed back to city (were I work) one night late about 2:30 am. Was headed out the back door and looking into the open door of the afore mentioned bathroom I saw a dark oval shape about 4 feet tall that move across the room from one side to other. I went after it and there was nothing there. Checked every room in the house... nothing... Set my skin a crawling. Was hard for me to accept that one took me 4 years and still have trouble. Skin still crawls too from time to time.

Things started to die down but not before all the burners on the stove were turn on spuing gas when I was gone for period of time and a locked back door opening while I was gone., was still locked and open.

I put some cameras in the place, caught the little flickering light and some weird little balls of someting moving around. All of these things tripped the motion detector on the camara.

Now were in Arizona doing the same thing to the home there.

You work outside at night in the summer time. One night was installing a propane power generator when myself and my uncle looked across the open space one saw a light (yes yet another light) coming across the outback. The vegetation is 9 -10 feet tall in the area (mesquite bushes, Joshua trees, etc) so what ever this is is tall. Looked kind of like a 60/70's car dome light. It just kept coming, I let it get close enough to be able to hear hoofs (someone on a horse) or foot fall and heard nothing. Was about 100 feet away and I hollered out "private property". Light went out, now I'm thinking someone there. Went running for the area quick. Nothing there..

Year goes by, It's march 2018: putting a water cistern, pump, etc. Started setting the drop lights up for the nights work when notice a rather large reddish color light over the mountain range about 30 miles away, noted it and kept working.

The drop lights I was using was plung into a gas generator that was also charging up a battery bank which cause the power to the lights to fluctuate dimming and brightening in a consistant pattern.

A hour or so went by got dark and I came out of the cistern shed I was working in and noticed these very large extremely bright lights in the sky in front of the house about 1000 feet in the air over the outback blinking, they would blink a few times in one area of the sky, then appear in another, blink a few times then move to another area. When I say "extremely bright lights" I mean burning fireballs in the sky. Looked like a small city was so bright. Was able to catch a few second an a old Samsung note4 camera which does not record night video, it doesn't do just to the size and how bright it was. Color was a fire color, yellow orange kind of color.

As I'm looking at these lights I realised two things: the pattern of the blinking is the exact same sequence has my drop lights and I had saw stars earlier and I could not see them any more. I suddenly had the desire to get the heck out of there!

I shut everything down grab my uncle ( who also was finding he had the same desire) and started heading out.

I took some video before going (mentioned previously) but not long as I was finding that disre to be rather overwhelming.

Well there's my story. Don't know if that maingie bugs bunny put some kind of mojo on me or what. But been trying to explane to myself every since.
Reactions: garnetsilver and WitchAndShaman

Hi RLB, welcome to the forum. This is a lot of activity. Do you think the rabbit may have been something else? People who are abducted by Aliens report seeing animals that are slightly off looking. Like a brain screen. Do you recall missing time? marks on your body etc.? If this is paranormal it sure seems like it is following you. If you investigate other UFO sightings and abductee reports I think you will see some similarities.

Lynne said:
Hi RLB, welcome to the forum. This is a lot of activity. Do you think the rabbit may have been something else? People who are abducted by Aliens report seeing animals that are slightly off looking. Like a brain screen. Do you recall missing time? marks on your body etc.? If this is paranormal it sure seems like it is following you. If you investigate other UFO sightings and abductee reports I think you will see some similarities. 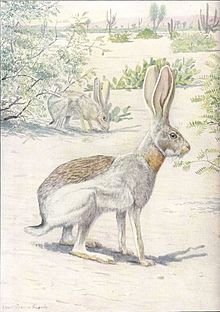 This is a huge rabbit found in the desert south west. Was it similar? This rabbit has a white chest.
Last edited: Oct 6, 2019
Reactions: ozentity and garnetsilver

What a fantastic recounting! Welcome to the PNF forums, and hope to hear more from you!
Reactions: ozentity 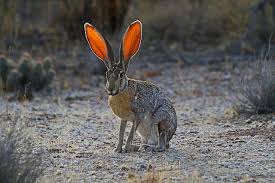 Lynne said:
Hi RLB, welcome to the forum. This is a lot of activity. Do you think the rabbit may have been something else? People who are abducted by Aliens report seeing animals that are slightly off looking. Like a brain screen. Do you recall missing time? marks on your body etc.? If this is paranormal it sure seems like it is following you. If you investigate other UFO sightings and abductee reports I think you will see some similarities.

Yes, it does seem to be following me. I did not encounter any loss of time or strange markers. In my profession I have to keep track of time so i''m pretty sure of this. I do think the rabbit wasn't a rabbit. I've been told similar to your suggestion, also was suggested I encountered a Navajo skinwalker.
Reactions: Lynne and garnetsilver
OP
R

I see theses quite often, they are all over

I see these quite often on my property in Arizona. Picture the rabbit I saw about four - five times larger, head was much larger and its checks was puffed out as if he had a bunch of rocks on each side. Also the ears were not standing straight up or layed back, like a normal rabbit. They draped down each side of the body going about halfway down, they were much longer than I've seen on any Rabbit
OP
R

Wanted to thank you for try to help me figure this out. Appreciate it.
Reactions: Lynne
OP
R

garnetsilver said:
What a fantastic recounting! Welcome to the PNF forums, and hope to hear more from you!
Click to expand...

Thank you! Based on what I've been going through I'll have more to share in the future.. whether I like it or not
Reactions: Lynne, garnetsilver and Debi