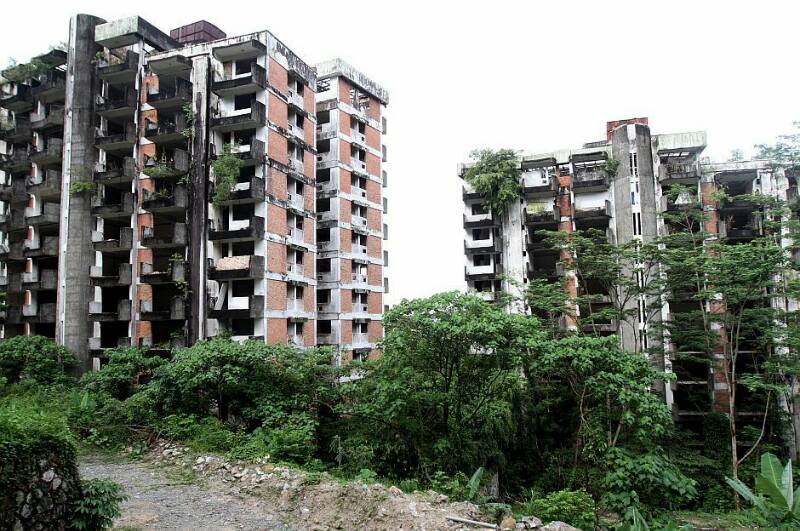 The Highland Towers collapse was an apartment building collapse that occurred as a result of a major landslide on 11 December 1993 in Taman Hillview, Ulu Klang, in Selangor, Malaysia. The collapse involved Block 1 of the Highland Towers, resulting in the deaths of 48 people and led to the complete evacuation of the remaining two blocks due to safety concerns.
The Highland Towers consist of three similar 13-story blocks, built in phases between 1974 and 1982 at the western base of a steeply sloped hill which was later terraced extensively in the early 1980s. These towers were home to affluent middle-class families; a sizeable percentage of the residents were expatriates.

Each block was respectively named:

A swimming pool was located between northwest side of Block 2 and northeast rear of Block 3.

in malaysia..this is haunted place and people got lost and full of entity and some people said this is home for unseen.their village.
Reactions: Debi
OP

Jerome arizona very haunted!
Jerome is 2hrs 8 or 10 min from me
https://www.wanderingsoulsapp.com/2017/10/05/unsolved-murder-sammie-dean/
P

Debi said:
Want to visit somewhere haunted? OK, starting a thread for just those special places.
Here's the first one. If you know of one, do add on!

The building that now houses Chicago’s popular Excalibur Nightclub was first erected to accommodate the Chicago Historical Society after its original building was reduced to ashes in the Great Chicago Fire. When the city went up in flames in October 1871, hundreds of people sought shelter inside the historical society’s supposedly fireproof building … and many met a fiery fate. Patrons and employees of the nightclub have witnessed strange apparitions, and there have been multiple reports of people being pushed down stairs and over railings by an invisible force. In addition, one lonely candle, located high up on a wall, out of reach without a ladder, has a strange habit of lighting itself – much to the confusion of the nightclub’s employees. Party here if you dare – just make sure you watch your footing on those sinister steps.
Click to expand...

The U.S. is filled with haunted places. Pretty much every single state has a haunted location of it’s own. It’s hard to tell which ones are the most haunted out of all of them. However, there are some that are more widely known for their paranormal activity. To me the one that sounds the creepiest to stay in would be the Trans-Allegheny Lunatic Asylum. It is located in West Virginia and is now the home to hundreds of souls of dead mentally unstable psychiatric patients. That's a no for me!

There is also a couple of other places that you might be interested in: Most Haunted Places In America - Xtreme Ghost Hunting

The only one in that list I feel shouldn't be there is that Atrox Factory as it's simply a glorified "haunted house" that is meant to be entertainment. If it's truly haunted, you'll never know because of all of the fake stuff that's there now.
OP

My mom grew up in LA, and knows about almost all of these places. I've been to the Old Zoo at Griffith Park (super creepy vibe), The Hollywood Pacific Theater (had one of the most unusual experiences ever there), The Hollywood Forever Cemetery (I had such an emotional reaction there that I had to leave almost immediately), and Linda Vista Hospital before it was turned into apartments (my Great Aunt was actually born there the year it opened, I couldn't even stand on the same side of the street as it, that place felt like pure evil to me). I have always wanted to go to Boris Karloff's Rose Garden but have never had the opportunity or the time when I have been in LA. Hopefully next time I go out there I will get to go. Another place that isn't on the list that I have been to in LA that is steeped in haunted history is the Cecil Hotel, now called The Stay on Main. Another place that I couldn't even bring myself to be on the same side of the street as.
Reactions: WitchAndShaman, 7Christie, Duke and 1 other person

number 10 on the list, "moon river brewery" is a cool place, the building is ancient, it sits right across river street in savannah, very old buildings and still a cobblestone street. not much has changed in 200 years, beautiful place, the building a few doors down is actually the oldest building in Georgia.... the brewery/pub has tunnels under it that go down to the river that was used to smuggle ppl and goods in and out from the ships coming in,,,,lots of history in that area and a step back in time when walking the squares and streets.
Reactions: WitchAndShaman, 7Christie and Duke

I don't know how haunted it is, but that Eastern State Penitentiary is one foreboding looking place. It seemed like every time I drove by, it was cloudy/rainy/gloomy. One morning it was very foggy, the place looked really creepy.
Last edited: May 23, 2019
Reactions: WitchAndShaman, WhitneyKristina, 7Christie and 1 other person
OP

Duke said:
I don't know how haunted it is, but that Eastern State Penitentiary is one foreboding looking place. It seemed like every time I drove by, it was cloudy/rainy/gloomy. One morning it was very foggy, the place looked really creepy.
Click to expand...

Some places just have an energy to them that reaches out and grabs you. This place seems to be one of them from all of heard.
Reactions: WhitneyKristina and Duke
You must log in or register to reply here.
Share:
Facebook Reddit Pinterest Tumblr WhatsApp Email Link
Top Bottom