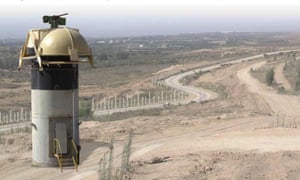 A Sentry Tech remote-controlled weapon station. Photograph: Supplied
Harriet Grant
http://www.theguardian.com/science/2015/oct/06/autonomous-weapons-un-delay-robot-wars#comments
The United Nations has been warned that its protracted negotiations over the future of lethal autonomous weapons – or “killer robots” – are moving too slowly to stop robot wars becoming a reality.

Lobbying for a pre-emptive ban on the weapons is intensifying at the UN general assembly in New York, but a deal may not emerge quickly enough to prevent devices from being deployed, experts say.

“There is indeed a danger now that [the process] may get stuck,” said Christof Heyns, the UN special rapporteur on extrajudicial, summary or arbitrary executions.

“A lot of money is going into development and people will want a return on their investment,” he said. “If there is not a pre-emptive ban on the high-level autonomous weapons then once the genie is out of the bottle it will be extremely difficult to get it back in.”

Observers say the UK and US are seeking to water down an agreement so that it only includes emerging technology, meaning that any weapons put into practice while discussions continue are beyond the reach of a ban.

“China wanted to discuss ‘existing and emerging technologies’ but the wording insisted on by the US and the UK is that it is only about emerging technologies,” said Noel Sharkey, a professor of artificial intelligence and robotics at the University of Sheffield and co-founder of the International Committee for Robot Arms Control, a coalition of robotics experts who are campaigning against the military use of robots.
MORE AT SITE
Reactions: Maphoo and 7Christie
OP

Debi said:
Add to that this one...

I really don't like the way their gearing up inside our boarders.Kind of makes me feel like the enemy is us .
Reactions: Debi
OP

Grinchesbro said:
I really don't like the way their gearing up inside our boarders.Kind of makes me feel like the enemy is us .
Click to expand...