The Federal Aviation Administration closed nearby air space this week.

well im sure for a lot of these "storm area 51" facebook crowd, the brothel would be an alien encounter.......lol.... but there is hope yet, it may just open their eyes to the real world and be proof enough that there is more to life than sitting behind a screen playing games or scrolling on facebook.....sad, a brothel may be this generations last hope.....lmao...go figure
Reactions: Duke and Debi
OP

And it has begun...the first group is headed in and setting up. 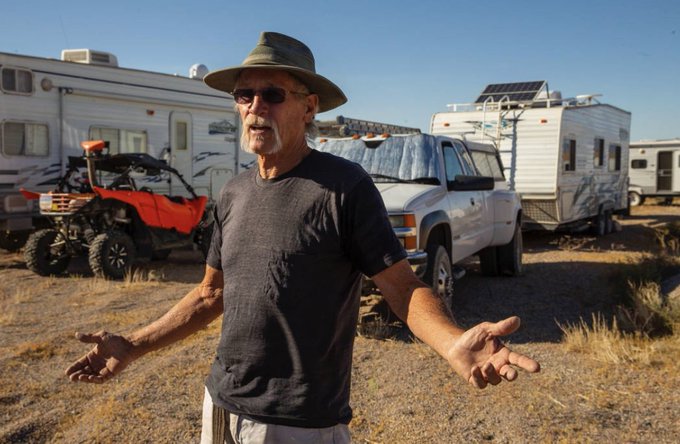 From Arby’s To Kool-Aid, Marketers Find Area 51 Weekend Out Of This World
OP

At long last, this summer's 'Storm Area 51' craze reached a crescendo early Friday morning when a small crowd of people gathered near the entrance to the secret military installation in a bid to "see them aliens." What began as a joke on Facebook in late June quickly went viral in the days that followed, with over 2 million people claiming that they would participate in a siege of the site in the wee hours of September 20th. Spawning a myriad of memes, copycat events, and merchandising opportunities, 'Storm Area 51' became a cultural phenomenon in the weeks that followed as celebrities, late-night comedians, and national news organizations took notice.

While most people understood that the idea was meant in jest and treated it as such, the prospect that even a small fraction of the 2 million purported attendees might actually storm Area 51 was enough to cause authorities to issue a number of stern warnings to anyone foolish enough to go through with it. With no one quite sure what to expect leading up to September 20th, precautions were taken, examples were made, and festivals were formed all in an effort to ensure that a massive group of people did not decide to try and charge into Area 51.

Fortunately, it would seem that these fears were unfounded as reportedly only around 75 to 100 people made the trek all the way up to the gates of Area 51 early Friday morning at the planned time for the 'raid' and their purpose appeared to be mostly so that they could take pictures in front of the signage for the site. For those keeping score at home, two people run afoul of the law: a woman who tried to circumvent a gate at the site and a man answering the proverbial 'call of nature' at the entrance to the base. Whether the latter individual's actions were a commentary on government UFO secrecy or simply because there were no bathroom facilities in the area is uncertain at this time.

Although only a few dozen thrillseekers ventured out to the gates of the clandestine military base last night, another 1,500 people are expected to attend the various festivals being held in nearby towns celebrating the 'Storm Area 51' phenomenon over the course of the weekend. With that in mind, we're guessing that security at the site will remain vigilant for at least the next few days in case anyone visiting from out of town gets the bright idea that perhaps trying the enter facility after September 20th might be more successful since the guards wouldn't be expecting it.
Reactions: Benway
OP 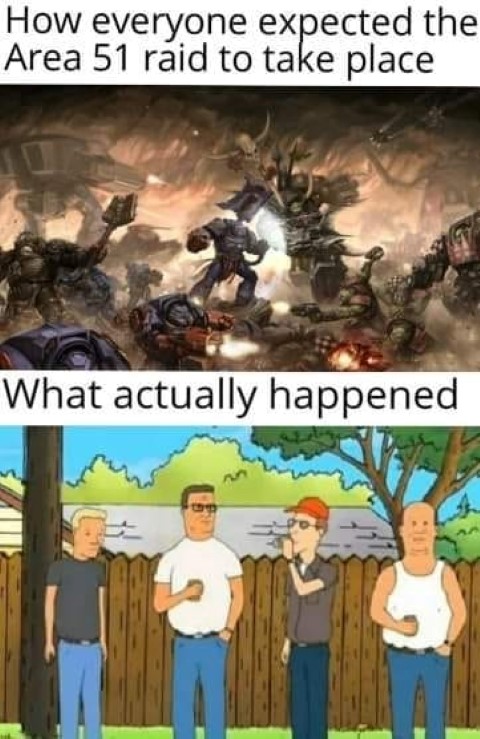 Ha! The distraction worked! The rest of us got in through the tunnel we'd been digging the whole time, while the lone guard was occupied!

Actually that looks likes it was fun.
Reactions: Debi

As we come to the end of this debacle, I can report that yesterday concerts, speakers and the movie were all cancelled at Basecamp in Vegas for lack of attendance. The small party in the desert in Rachel quietly continued for a bit...heavy on the beer and wild costumes. Looks like Matty picked the wrong party to back.
You must log in or register to reply here.
Share:
Facebook Reddit Pinterest Tumblr WhatsApp Email Link
Top Bottom