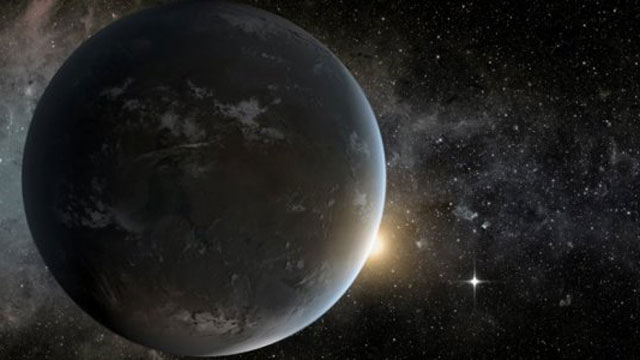 A potentially habitable terrestrial planet has been discovered in the relatively nearby Wolf 1061 system.
The hunt for a second Earth may have just moved a lot closer to home - give or take a few trillion miles - thanks to the discovery of three planets orbiting a red dwarf star only 14 light years away.

All three of these worlds are thought to be rocky terrestrial planets like the Earth and one of them is even sitting within the 'Goldilocks' zone where liquid water could potentially exist on its surface.

Despite the similarities to our own planet however this alien world is thought to orbit much closer to its parent star with a year there flashing past within the equivalent of just 18 Earth days.

"Given how close the planet is to the star it is likely to be 'tidally locked'," said team leader Duncan Wright from the University of New South Wales. "This means that one hemisphere of the planet will always face towards the star, much like one side of the moon always faces Earth."

While this normally means that one side of the planet will be very hot and the other side very cold, atmospheric modelling has indicated that high winds could help to circulate the heat.

As for whether the planet can support life - there's really no way to tell for sure at the moment, but scientists are certain that there are countless other worlds just like it throughout the universe.

"There is somewhere in the vicinity of 100 billion stars in our galaxy," said Dr Wright. "We know that half of those stars are red dwarf stars, like Wolf 1061."

"From observations made by the Kepler space telescope, we also know that half of those stars are expected to have multiple rocky planets orbiting them."
You must log in or register to reply here.
Share:
Facebook Reddit Pinterest Tumblr WhatsApp Email Link
Top Bottom