A company called "Recompose" is trialling a method to turn dead people into fresh compost instead of sticking them in a hole in the ground or burning to ash. They said it produces a tonne less CO2 per person and is more enviromentally friendly.

The process involves placing the body in a container along with woodchips and alfalfa meal, and in about 30 days (of slow rotation) it produces a material similar to compost.
So far the trials using 6 people have been successful (they gave consent while alive), apart from their bones which remained whole. The company said they were working on that which I presume means putting them through a wood chipper at some point or a meat grinder - either prospect I think is horrific, but maybe not as horrific as stuffing aunt Mable into the wood chipper to start with. 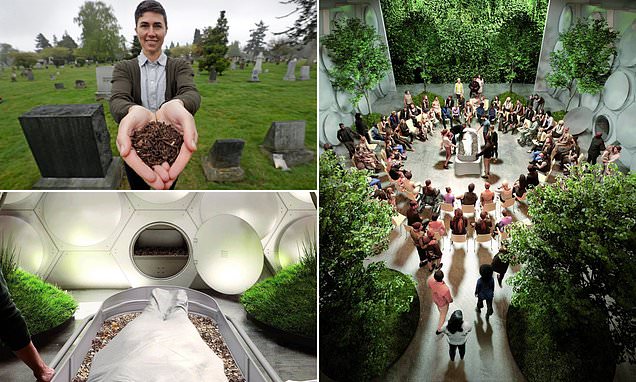 When it launches commercially in February 2021 in Washington State, USA, it will be the first human composting service in the world.

During trials with the 6 humans, CEO of Recompose Katrina Spade...... (you couldn't make it up could you) told the BBC 'We all kept checking in on each other. My physiology felt different, I wasn't sleeping well for a few nights, I wasn't hungry - it was a distress response,' - I think she meant she felt sick at the prospect of opening that thing.

Still, being turned into compost with a few handfuls of bonemeal could be a better solution - as long as you don't mind finding a few teeth in your potting mix.
Reactions: WitchAndShaman

This just shows how society is devaluing life. Showing respect for the body reflects how we feel about the living. That is a disgusting idea. Just my opinion.
Reactions: Paintman
OP

Lynne said:
This just shows how society is devaluing life. Showing respect for the body reflects how we feel about the living. That is a disgusting idea. Just my opinion.
Click to expand...

Well I certainly wouldn't want to be running the thing. Even after it's finished you will still have 4 or so large bags of 'compost' to dispose of and then what - grow your tomatoes in it?

I suppose if you were a keen gardener you could be put back in your own greenhouse and legally interred there. I wouldn't mind haunting a greenhouse.
Reactions: Lynne

I don't want no fancy funeral, just one like Old King Tut.