WHAT WAS THE WORST HAIRCUT/STYLE YOU'VE EVER HAD? 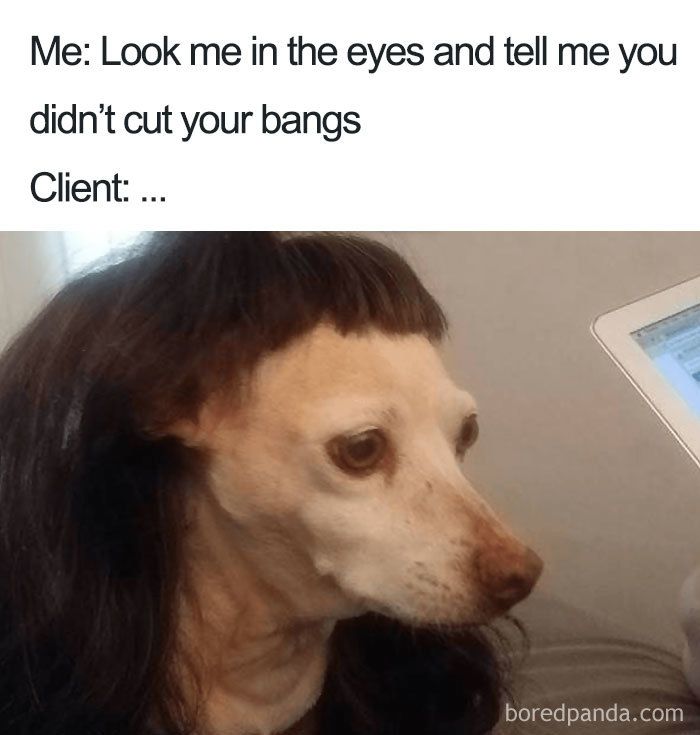 In the early 80s I got a perm. Not only did I look ridiculous, but it was soon after that I started losing my hair.
Reactions: Lynne, Paulm, RoseRed and 5 others
OP
OP

In my younger days, I went through a hair color crisis. I was 18 colors in 24 months. Topped that off by a perm and it turned into green "fur". Had to cut it all off and this was in the 80's...the time of the big hair! Quite the crisis! lol
Reactions: Paulm, RoseRed, Paintman and 3 others

why does the fly walk into the spiders web?

I had a bowl cut at one time as a kid ick
Reactions: Paulm, RoseRed, Paintman and 3 others

Mullet in the 80's,lol, they look worse these days and are making a comeback over here .
Reactions: Paulm, RoseRed, Paintman and 2 others

This actually happened when I was a child. I envied the hair of the little girl seated next to me in school, so I bugged my mother to let me have a perm. This was in the sixties, when any perm solution was bound to be harsh and burn the scalp like hell. So she finally gave in. I was sitting there waiting for her to go to the next step of the process, when a family emergency arose. I sat there, crying because the solution was burning my scalp while everyone rushed around in distraction. My grandmother finally had the presence of mind to walk me over to the sink and rinse the stuff off my scalp. Thankfully my hair was not ruined!
Reactions: Lone Wolf, RoseRed, Paulm and 3 others

I had the 'almost mullet' in the 80's and 90's lol. Never had an issue with it. Never killed my social or intimate life
Reactions: ozentity, garnetsilver, Paulm and 1 other person
OP
OP

ozentity said:
Mullet in the 80's,lol, they look worse these days and are making a comeback over here .
Click to expand...

Selectric said:
I had the 'almost mullet' in the 80's and 90's lol. Never had an issue with it. Never killed my social or intimate life
Click to expand...

These are coming back! Why I don't know, but yup!
Reactions: Selectric, ozentity, garnetsilver and 2 others

Well here's the haircut I almost got last summer. My regular Barber Shop was too crowded and I had to have a haircut that day for a family event the following day.
Saw this new place down the street and walked over. They're about three people ahead of me and I'm just sitting around and taking in the atmosphere.

The barber was a younger guy with lots of jewelry and facial hair that looks like it would take hours a day just to maintain that look. His hair looked like it use some sort of an industrial adhesive to keep it in place .Big baggy pants and angry tattoos.
The clientele was going for a similar look.

Fat chance I was going to get a haircut like this. That's what I normally get.

I politely excused myself and left. I shudder to think what I would look like with shaved sides and blonde dreadlocks combed over.
Remembered that the people that work at the barbershop go next door to the tobacco store and smoke on their break. I went there and asked if someone could help me out. Successful !

I had a mullet in the late 80s but it wasn't called a mullet back then. That came later with the Achy Breaky Heart era. It was just growing out to one length and didn't go too far past the collar. If I had to go someplace dressed up I just comb it back into a DA.
Reactions: Selectric, ozentity, RoseRed and 4 others

Duke said:
In the early 80s I got a perm. Not only did I look ridiculous, but it was soon after that I started losing my hair.
Click to expand...

In the 80's I worked with a guy close to 60 who kept his hair in a perm. One day at the bosses house while the guys were playing pool with the bosses father in law, the old man (father in law) called the permed guy a "high yaller punk". I was the only one besides the permed guy who knew what kind of insult that was (we were in Texas) The old man had a bad habit of purposely saying rude things to make people angry, then he would laugh at them. But that one almost got him beat up. That is the only time I have ever seen a man with a perm.
Reactions: Selectric, ozentity, Paintman and 2 others
You must log in or register to reply here.
Share:
Facebook Reddit Pinterest Tumblr WhatsApp Email Share Link
Top Bottom